Following a successful AIPB Cake Stall in Boussac on Saturday 15 July, 2017; the AIPB were able to donate all its profits from this event to the SPA in Gueret. The total donation was €350 and in the below photo Alan Collier-Parker (deputy treasurer AIPB) can be seen handing over the cheque to Faye Jones. 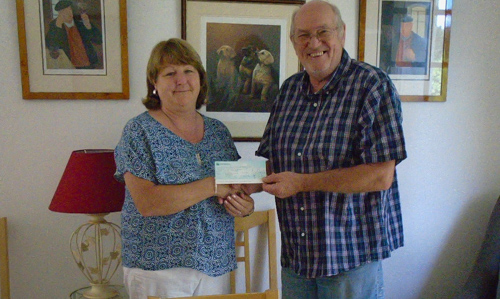 Faye is a volunteer at the SPA and she works very hard, along with others, to raise money for the SPA’s desperately needed new building. Faye sent us the below article about the SPA in Gueret:

The SPA de Creuse is the only one in this department and it was built in 1965 and since 2012 has been under threat of closure as it no longer conformed to current safety and sound standards.

Work has now started, and will be completed in stages with the dogs remaining on site whilst the work continues. The work is probably going to take about 10 months to complete and will cost over a million euros. The new refuge will cater for 50 dogs and the pens will be built in an arc, which will be more modern and less stressful for the dogs. Plans of the new refuge are available on the SPA website.

The SPA has also created a dossier which is available to view on their website ‘Dossier de demande de subventions’ which in French, details the role of the SPA and the costing’s of the new refuge.

The SPA is totally reliant on legacies, local subsidies, donations, fund raising events, like brocantes and quiz’s and financial partners to raise the money they need. There is actually an incentive for local businesses to donate as sponsoring is considered as a tax-deductible gift, which allows companies do deduct from their taxes the amounts committed up to 60%. Donations are not subject to VAT. Private donations can also be placed on your tax return to receive a reduction in tax paid.

Details on how to donate are on the SPA de Creuse website.